Nashville made strides for monumental growth in 2020, including population growth, heightened construction, and employment opportunities. Household formation is more than double the national average, partly due to the numerous significant universities that call the metro home. Millennials account for a majority of the population growth in the metro and thanks to an ever-expanding job market, many students choose to stay and work in Nashville. As a result, employment sectors occupying office space have been growing at one of the fastest, and consistent rates over the past decade. In fact, Nashville is one of the strongest office job markets in the country which has helped insulate the metro during COVID-19. Although Nashville is seeing delayed repercussions from the pandemic, the metro is poised to experience growth in 2021. With Nashville’s high exposure to tourism and conventions, economic growth may further be hindered. The good news, Nashville is already showing signs of pre-COVID-19 normalcy, with job growth returning over the last several months and every CRE sector expanding beyond the national rate. Recovery is expected in Nashville sooner than in other metros and demand for commercial real estate in Nashville remains apparent.

Before COVID-19, Nashville was one of the strongest retail markets in the nation. Today, the 12-month net absorption has fallen to the lowest in the last ten years due to investor uncertainty throughout 2020, causing vacancies to rise over the previous few quarters to 3.9 percent. However, vacancies are still relatively low compared to the national average, which has allowed owners to spike rents to $23.71 per square foot. Nashville has one of the fastest-growing retail rental rates in the country for the last four quarters, pushing the metro above the national benchmark for the first time in over 20 years. Construction dropped during the pandemic, compared to the 2000s when the metro grew its footprint by 25 percent and only five percent during 2010 through 2019. A majority of new projects consist of mixed-use or grocery-anchored developments in both urban and suburban markets. 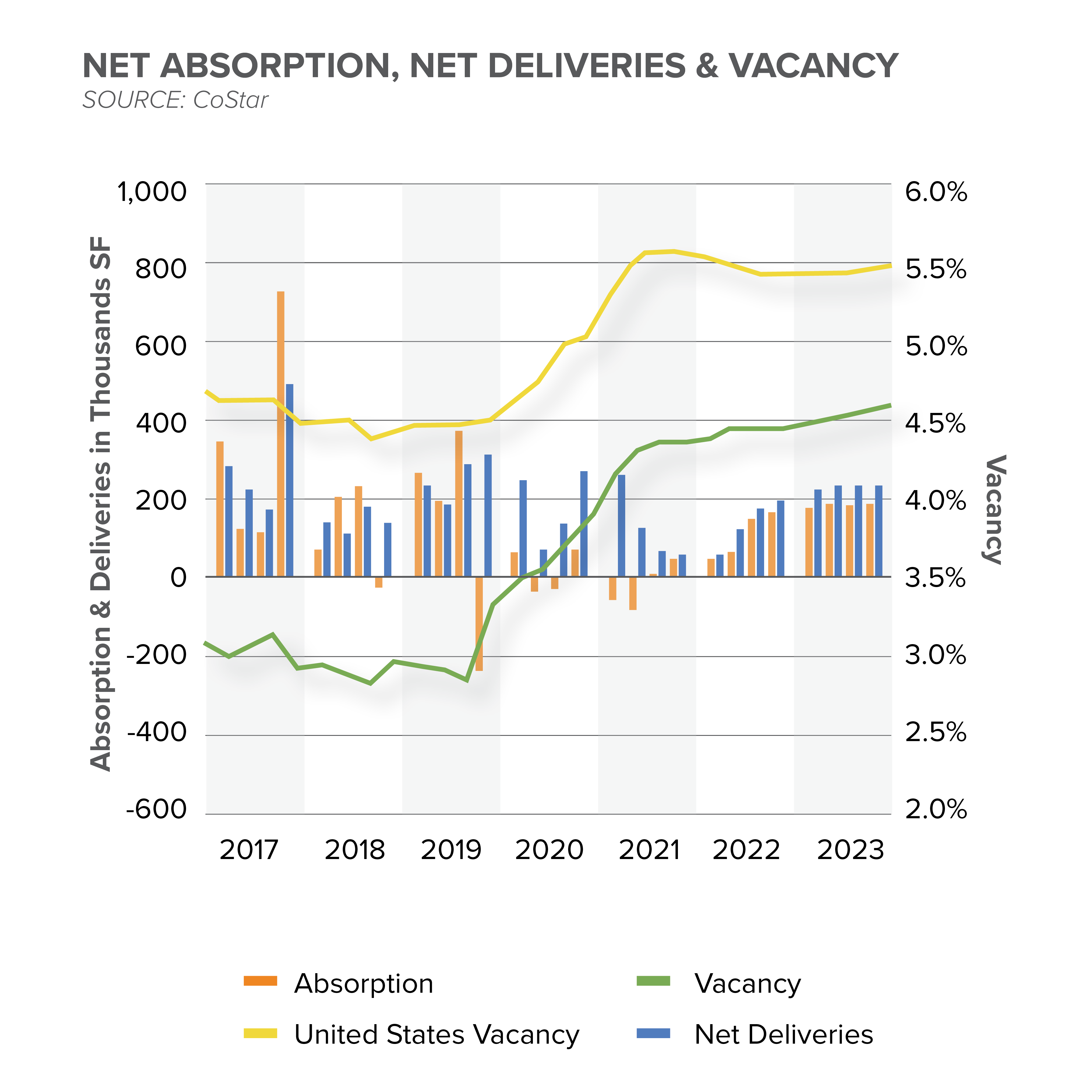 Following the plethora of deliveries in the late 2010s, Nashville’s multifamily market restabilized until the pandemic. The delay in construction has only caused the pipeline to grow substantially, around 12,000 units or ten percent of inventory, once again indicating Nashville will be facing headwinds to recover occupancies and rental growth. All hope is not lost, though, as national brands like Amazon and AllianceBernstein announce various employment opportunities, helping with absorption. Although asking rents sit below 2.5 percent year-over-year, national and international investors fueled the second half of 2020’s activity, compressing cap rates to 5.2 percent. Nashville’s strong economy and multifamily market prior to the outbreak indicate the metro will see a fast recovery. 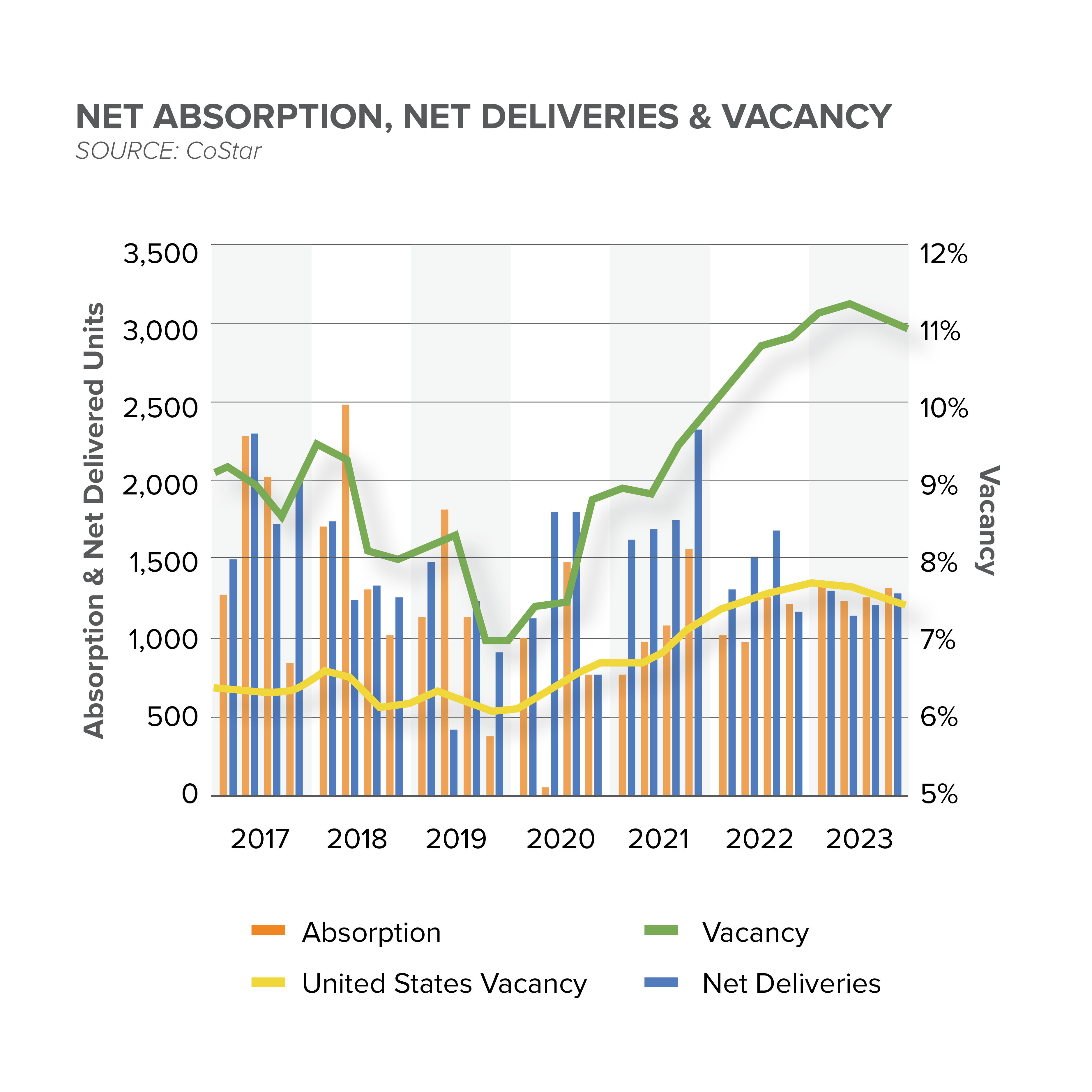 The Nashville office market held an impressive track record for the years leading up to the global outbreak
as one of the strongest office-job markets in the U.S. since 2010. Leasing activity inevitably declined in 2020, and the speculative deliveries have ultimately pushed down occupancy. Amazon’s new one million square foot Center of Excellence will soon call Nashville home, AllianceBernstein signed a lease for a 205,000 square foot space in preparation for its new headquarters, along with Revance Therapeutics, a biotechnology company. Just like the outstanding retail growth, Nashville’s office footprint followed suit, with two million square feet delivered in 2020 and 6.7 million square feet currently underway. About 50 percent of these developments are already preleased, but the amount of availability has made rental growth stagnant in the last 12 months, breaking its ten-year streak. Sales reached $1.1 billion in 2020, a decline compared to years prior, setting a precedent for the coming years if vacancies and rental growth do not normalize. 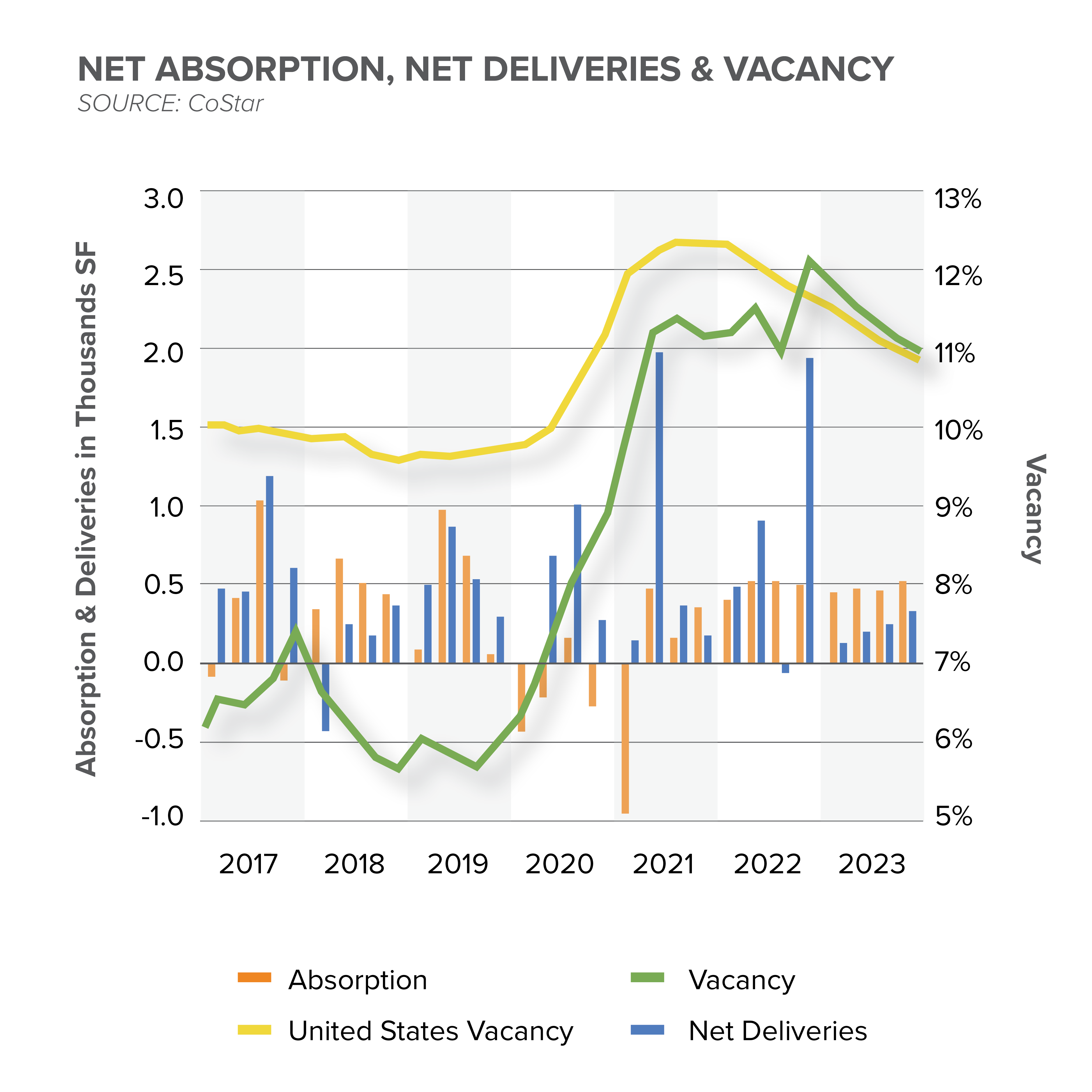 The industrial market saw strong demand in 2020. The metro’s geographic position allows companies to reach over half the nation’s population in a single-day drive, which is why third-party logistics firms, e-commerce companies, and retailers eye Nashville for distribution and warehouse hubs. Not only that, but the high percentage of modern logistics space and the recent deliveries of preleased warehouses boast favorable net absorption figures. More than 6.5 million square feet have been delivered over the last several quarters, and strong interest from national and regional firms have kept vacancies near record lows. Amazon is expanding through a large build-to-suit facility in Wilson County, and has leased a 1.1 million square foot distribution space since 2019. Another 16.6 million square feet is underway, showcasing yet another sector in Nashville growing at one of the country’s fastest rates. 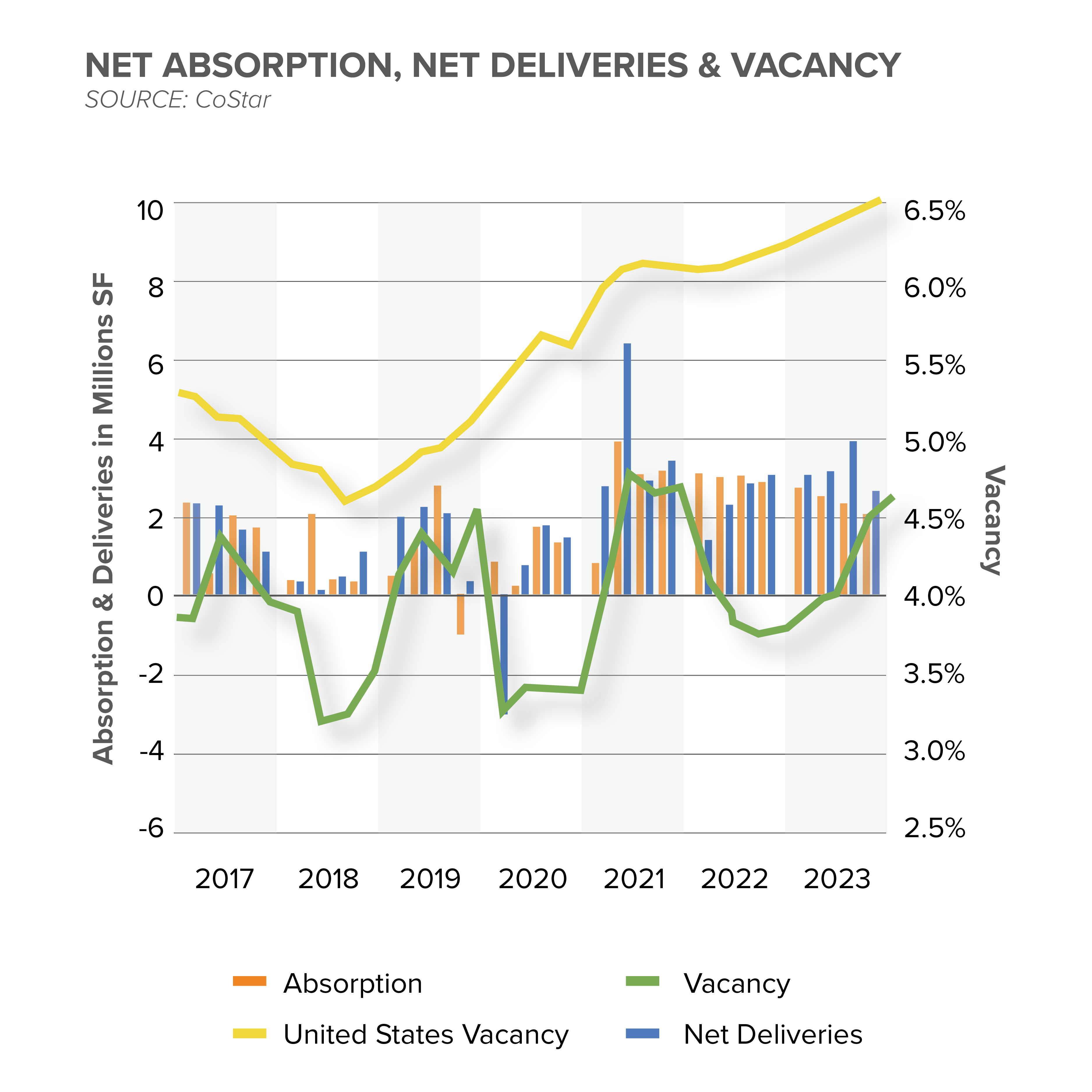 As Nashville’s largest employer providing 362,000 jobs annually, the healthcare sector plays a prominent role in the industry. In fact, according to the Nashville Regional Economic Development Guide, the metro is widely known as a national healthcare industry capital and global leader. Given that the demand for healthcare is relatively inelastic, and that the sizable baby boomer cohort is aging, this sector has helped Nashville find stability during the downturn. Over 500 healthcare companies call the metro home working on a local, national, and international basis, generating $92 billion annually. In 2020, healthcare transactions totaled $36.9 million, or $227 per square foot. Over $1.6 billion in venture capital has been invested in Nashville’s healthcare sector for the last ten years, largely due to its reputation for dynamic and innovative healthcare.

Nashville is a top prospect for various national and international investors with strong market fundamentals in almost every aspect. The demand that poured over from 2019 helped keep Nashville afloat during 2020 and will likely help with recovery moving forward in 2021. While employment reached a historic low in April 2020 with 140,000 lost jobs, the Bureau Labor of Statistics shows broad-based rehiring has occurred over the last several months.

For more information on the Nashville market, please reach out to a Matthews™ specialized agent today. 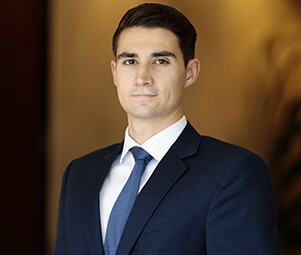