ATX: The Place to Plant Capital

Why Invest Capital in Austin, TX?

It’s no secret that Austin is one of the most popular markets in the country. From a soaring number of people moving to the metro paired with major company relocations, Austin is the place to live, hire, and plant capital. Gone are the days when Austin was a hidden gem; the metro is now exposed to large-scale conferences, festivals, and events from SXSW to Formula 1, and extensive headquarter and industrial buildouts like the Tesla Gigafactory. Austin’s booming tech industry, business-friendly climate, and the young population are the primary factors driving growth.

Growth Factors That Make Austin Such A Strong Market

Since 2010, Austin has outperformed the second-fastest-growing market, Raleigh, by more than 7.5 percent, growing a third between 2010 to 2020. Since the last U.S. Census Bureau Survey in 2020, the metro has increased by roughly 29 percent compared to Raleigh and is on track to eclipse San Antonio as the third largest city in Texas, according to CoStar. With 120 to 150 people moving to Austin per day, these numbers come as no surprise, as population growth pushes ahead of any other primary market and is on track to rank among the top ten cities by population. The population is projected to reach 3.2 million in the next ten years which is significant when compared to the 2020 population of 2.295 million and consider all the surrounding areas not included in the 3.2 million number.

According to the Bureau of Labor Statistics, Austin saw the fewest job losses of any market in the U.S. because of COVID-19. The market is generally insulated from massive shocks, as the government remains a crucial driver for Texas’ capital. The government sector comprises nearly a fifth of the workforce; as such, the state and local governments have historically provided employment stability. The labor market is also particularly young and is among major economic and demographic development rankings. U.S. News and World Report ranked UT Austin second globally, behind a University in Beijing, in the increasingly important field of computer science. Austin is quickly on its way from a government-based city to a tech hub with solid undercurrents of various manufacturing and industrial economic sectors. Job growth has been concentrated in the professional and business services sector, which comprises many of Austin’s tech-related jobs, as well as the trade, transportation, and utility sector, thanks to significant demand in Austin’s industrial sector. With an increasing tech presence, Austin’s economy continues to experience a multiplier effect, each new high-tech job in the U.S. creates five additional jobs in the service economy, per MIT Sloan data. Click here to read office performance.

There is no end in sight as companies recognize the volume of talent that resides in Austin. Low business costs (especially compared to the Northeast and West Coast), pro-business policies, and high quality of life complimented by the deep bench of tech talent continue to draw businesses to Austin. The young, highly educated workforce has also attracted employers and delivered high-paying jobs to residents, which has boosted the median household income to above the U.S. average, further contributing to the city’s economic growth.

The Blue Heart in a Red State

Austin is socially aligned with the viewpoints of most of the U.S. population and corporations, with the critical mass of talent in place and growing we are seeing unrelenting expansions, relocations, and HQs announced.

With roughly 2.3 million residents, Austin has been painted as a haven for young professionals looking for a fun place to live, pursue their careers, and earn a decent income. The demographics confirm that to be the case. With plentiful positive statistics, investors and businesses have decided to plant capital in the market and are experiencing the benefits of participating in one of the strongest markets.

Fueled by one of the strongest economies in the nation, Austin’s industrial market arguably had the best year ever last year. While not traditionally known as an industrial market, the last mile demand from consumers has spurred development and placed pressure on the sector to create space to serve the growing population. Despite 11 million square feet delivered over the past year, representing ten percent of current inventory, vacancies fell about 300 basis points, reaching the lowest rate since 2016. As a result, landlords have pushed rents about ten percent on the year, ahead of the national index and continue to see strong market rent growth. Developers have reported the increased demand for space by kicking off multiple new speculative developments. The pipeline has been inflated with several build to suits, particularly large-scale distribution space for last-mile transportation purposes. Outside the Tesla, Amazon, and Samsung headlines, leasing activity has been robust, absorbing about 14 million square feet over the past year.

Austin is one of the strongest retail markets in the nation and thus has been largely insulated from the uncertainty that many expected at the onset of the pandemic. Occupancies have remained north of 96 percent, net absorption is positive, and momentum continues for leasing activity. Due to superlative demographics, retailers are drawn to Austin, but many find ever-increasing competition from e-commerce companies like Amazon. Many retailers also favor Austin due to the surrounding city government’s willingness to work with companies moving to the area by speeding up entitlements and zoning approvals to bring growing businesses that contribute to the economy of the area.

Compared to other major markets, Austin ranks in the upper half of inventory under construction. The northern suburbs, including Round Rock, Pflugerville, Georgetown, and Cedar Park have seen the highest amount of development and are likely to continue as Apple expands its campus in Cedar Park, with expectations that it will hold 15,000 employees. Additionally, aggressive population and income growth further prove the need for brick-and-mortar retail even with e-commerce disruption.

Investor appetite for retail assets hasn’t slowed either in the Austin area. CoStar estimates that about $1.5 billion worth of assets changed hands in 2021, the highest year on record. Before the pandemic, cap rates were as low as about four percent for some net lease products, but the average is typically around six percent to seven percent depending on the quality of tenants and location. 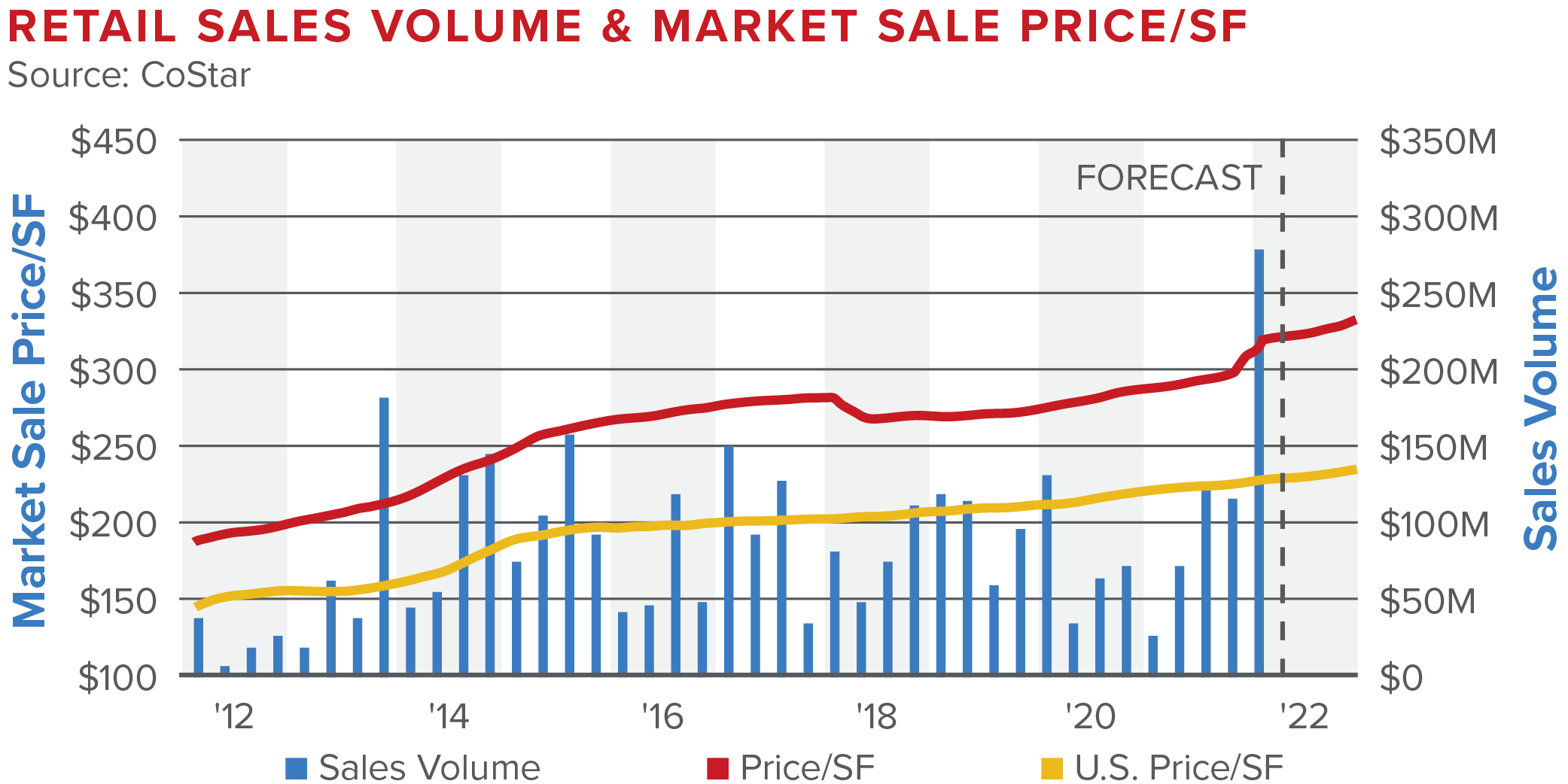 In the first two months into 2022, overall vacancy in the Austin retail market tightened to 3.7 percent, dropping 100 basis points from this time last year. Availability is at 4.9 percent, down 130 basis points from February 2021 at 6.2 percent. According to NAI Partners’ monthly retail report for Austin, TX, the difference between this figure and the vacancy rate reflects expected future move-outs. Overall positive trends in leasing activity have driven average retail asking rents higher. The Austin metro NNN average asking rent is at an all-time high of $21.92 per square foot, up 4.8 percent from $20.92 last year. With one of the strongest economies in the country over the past decade, retail landlords in Austin have significantly benefited.

Austin hasn’t reached the end of the runway yet. In fact, there’s quite a bit of growth potential left as investors and various companies continue to pour capital into the market and there’s an argument to be made that Austin is still in an infancy stage. The city does face its fair share of growing pains as the rapid-fire population continues, resulting in limited land availability, price increases, affordability, and infrastructure challenges. The good news is the city can handle almost anything thrown its way, plus, the growing population has presented Texas with two additional votes in the Electoral College for the 2024 presidential election. Austin won’t be slowing its roll any time soon as creative developments, redevelopments, and relocations continue to pop up.

As an investor, the new playing field is allowing past investors to capitalize on their investments and exit hold periods as Central Texas continues to usher in out-of-town investors. With the number of first-time Austin buyers in 2021, the continued expected growth, there is no slow down of where the city is heading. The I-35 corridor and San Antonio have presented opportunities for local investors to chase better yield and a lower basis instead of competing with institutional buyers, private equity, and a currently dynamically crowded Austin real estate market.

Please Fill Out the Form Below to Access the Full Article 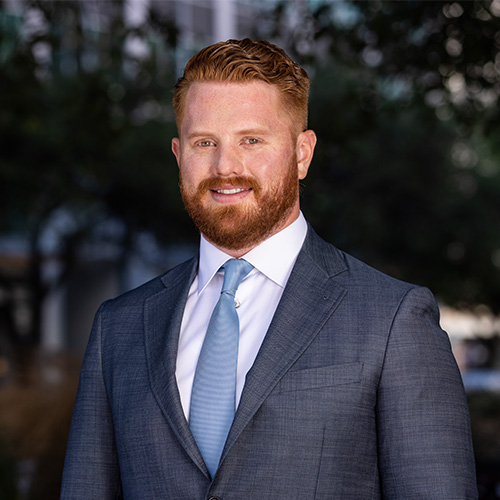