Atlanta’s retail sector has been positively impacted by the metro’s strong demographic and economic growth. Deal volume has picked up in recent quarters, showing resilience since the pandemic. Retail landlords are confident in the state of Atlanta’s market, as year-over-year rent growth has picked up. Additionally, redevelopment plans are in the works for shopping centers, malls, and other large-scale facilities. Investors remain hopeful about the upward trajectory of Atlanta’s retail due to improvement in leasing activity and net absorption. Current fundamentals are improving, which can be seen by Atlanta’s lowest vacancy rate at 4.0 percent, the lowest it has been in more than two decades, as well as $1 billion in retail sales in Q1 of 2022. 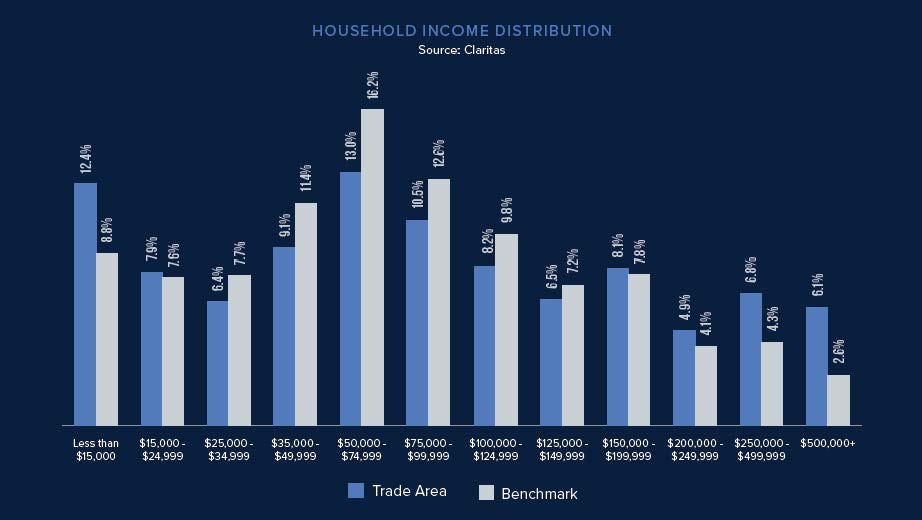 Atlanta’s retail demand has been buoyant in the past six quarters, ranking the metro as one of the top markets in the country in terms of trailing 12-month net absorption. Overall, the metro’s leasing activity is still below pre-pandemic norms. Quarterly leasing volume in 21Q4 and 22Q1 averaged about 1.6 million square feet, while 2015-2019 was about 2 million square feet. Many factors are expected to contribute to Atlanta’s upward leasing trajectory, including population growth and economic recovery. Atlanta recorded its lowest vacancy rate over the past two decades at 4.1 percent, and the metro’s strong economic recovery should continue, helping boost retail demand in future quarters. Atlanta’s booming population growth has nearly doubled the country’s average, as well as median household income growth. These factors will contribute to retail development and overall economic recovery after the pandemic. Retail demand is growing in northern suburbs, which are experiencing the fastest increase in population and income.

The Atlanta metro has been on the rise since the onset of the pandemic, where it saw many store closures. The increase in consumer spending and economic recovery is anticipated to advance retail rent growth in the coming term. In the quarters since the pandemic, exurban and south metro submarkets have been outperforming the market average. The average rent in Atlanta is approximately $19.10 per square foot. 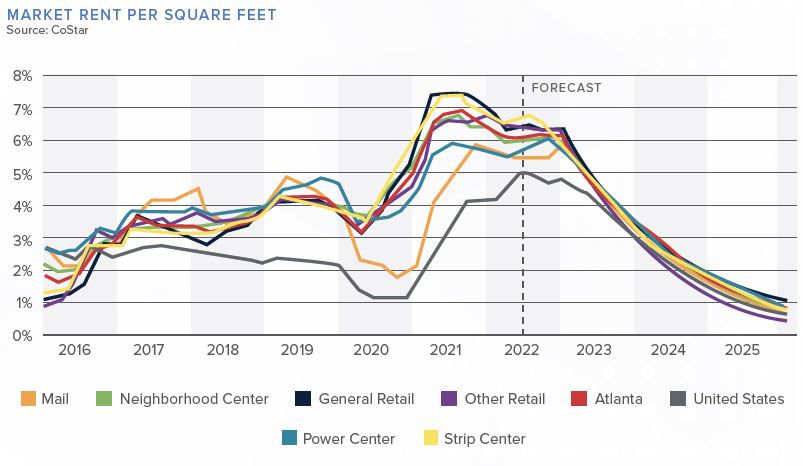 Atlanta has two million square feet, or 0.5 percent, of its existing inventory under construction, which is roughly in line with the national average. Most recent retail built in Atlanta’s metro has targeted affluent households and areas with strong demographic growth in fast-growing exurban submarkets. A high volume of developers is targeting older, well-located retail centers for redevelopment. Many of these plans include multifamily components, seen by the demolition of Rosewell Shopping Center, which was made into a 300-unit multifamily project.

Transaction activity has picked up recently, slowly recovering from a lull during the pandemic. The metro’s solid rent growth and low vacancy rate helped drive up prices in recent years, as well as same-store price growth has increased over the last few quarters. In Q1 2022, transaction volume came in at approximately $1 billion. Atlanta has one of the highest average cap rates, at about 7 percent, compared to the national average of 6.8 percent. The average price per square foot in the metro is about $195, lower than the U.S. average of $230 per square foot. Just over half of sales volume in Atlanta is attributed to out-of-state buyers, including Lincoln Property Company and Asana Partners. Additionally, suburban and exurban areas have seen grocery-anchored shopping centers catching investor interest.