How Will Inflation Put Dollar Stores to the Test?

The Impact on Inflation

According to the U.S. Bureau of Labor Statistics, the consumer price index (CPI) increased 7.9 percent year-over-year in February 2022. U.S. inflation is running at a 40-year high, making it increasingly difficult for consumers to stretch their dollars. Supply chain issues are still running rampant, indicating that high levels of inflation will persist well into 2022. All this, paired with the extreme labor shortage, has cornered discount retailers in a tight spot. Dollar stores thrive on their bargain prices, but how will they respond to inflation, supply chain issues, and a labor shortage? 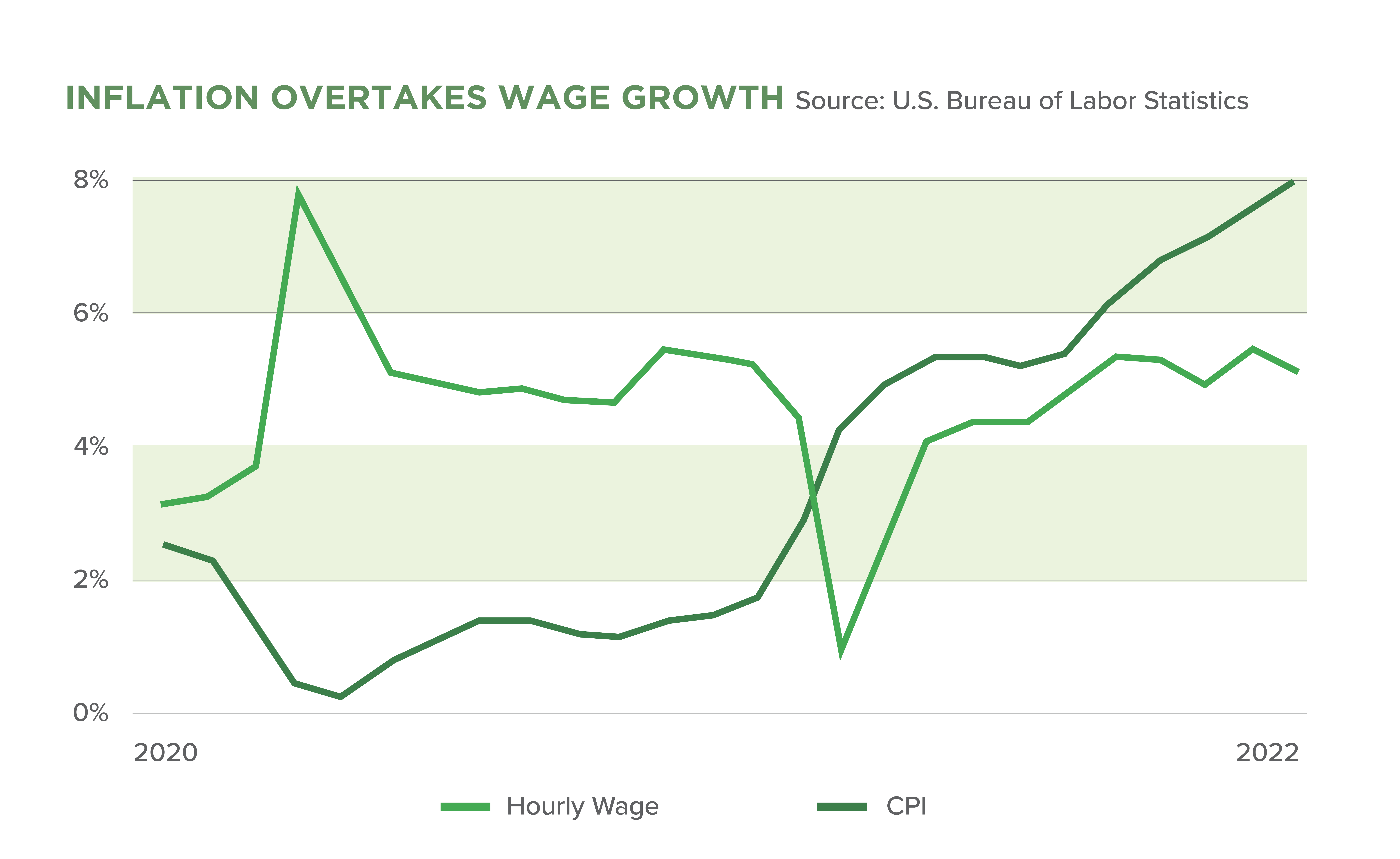 As the only major dollar store chain to exclusively sell products for $1, Dollar Tree raised its baseline prices for the first time in 35 years by 25 percent to $1.25 in November 2021. Dollar Tree’s CEO claims the increase is a permanent decision but is not a response to short- term or transitory market conditions.

With 40 percent of its products manufactured in China, the increased prices will help mitigate the rising costs to import these products. According to the U.S. Bureau of Labor Statistics CPI inflation calculator, when Dollar Tree opened in 1986, a dollar equated to $2.25 of purchasing power. In 2020, before the inflationary environment, it was equivalent to the purchasing power of $2.38.

It’s worth noting that Dollar Tree was already testing price increases when it acquired Family Dollar in 2015. Family Dollar’s price points start at $1 and reach upwards of $25. Since the acquisition, the company rolled out combo stores that leverage the strengths of both Dollar Tree and Family Dollar products in one location. The dollar store giant also began testing out prototype stores, such as Dollar Tree Plus!, carrying a selection of products priced at $1, $3, and $5 in May 2019. Dollar Tree found that customers are unphased by the increase through these executions.

About 90% of shoppers surveyed this year in test rollouts indicated they would shop with the same or increased frequency despite the 25 cent price shift. Source: Dollar Tree Inc.

When Dollar Tree was sticking to its $1 price point, it was forced to remove popular products from its inventory line. However, it’s not all bad news, inflation has actually driven more customers into the stores as they focus more on value in the current market. 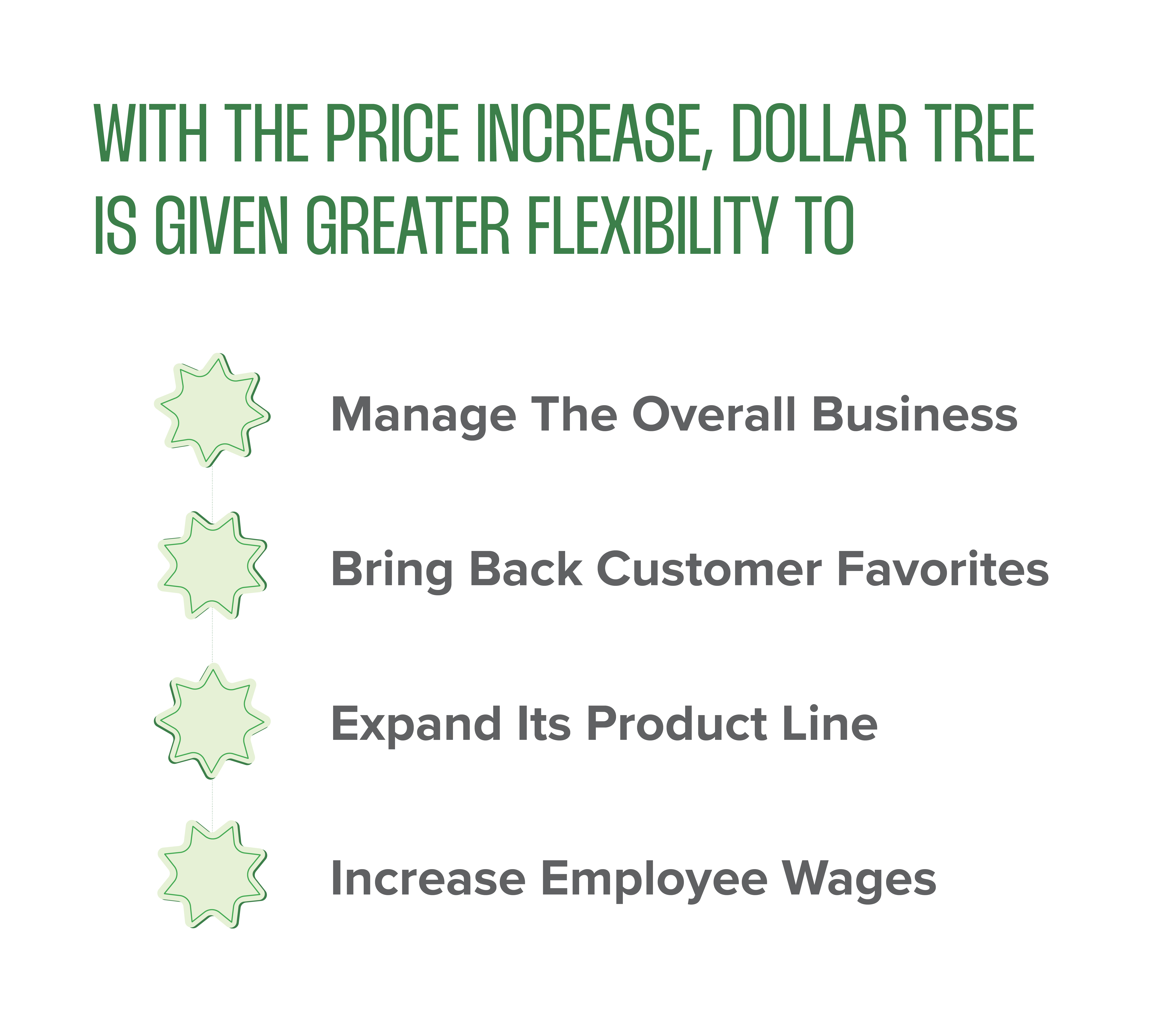 In fact, according to its earnings report, the company opened 97 Dollar Tree stores in Q4 2021, a rate of more than one a day. Dollar Tree also saw increased revenue during that same time, reporting over $7 billion in net sales, a 10.3 percent increase compared to Q3 2021.

Contrary to its discount counterparts, Dollar General has no plans to raise its primary $1 price point as its products range from $1 to north of $20. Dollar General’s CEO stated that shoppers are seeking out affordability and continue to exceed their expected retention rate. Though Dollar General reported decreasing store traffic, there was an increase in the average basket size with an average of six items worth $16.

To service a broader subset of its customer base and attempt to appeal to an even broader cross-section of America, Dollar General has tested out new store concepts, such as Popshelf, which offers higher-end goods around the $5 mark. Popshelf stores aim to target a different audience compared to the traditional Dollar General consumer.

Significant investor interest in the product type during the pandemic, due to extreme value discounters being deemed essential, has compressed cap rates to new lows. As the power of the dollar weakens, discount retail investors grow concerned about expansion plans.

Dollar General is slated to open 1,110 stores in 2022, including ten international stores in Mexico. Dollar General’s CEO cited the international expansion as an exciting era for the organization to expand its footprint to serve communities in Mexico and reflects the innovative spirit and dedication to serving others. Dollar Tree still plans to open 590 new stores and renovate 800 Family Dollar stores in 2022.

The most considerable investor concern stems from the restrictive rent increases built into a typical dollar store lease structure. Dollar General structures their new leases as a 15-year agreement with a flat rent for the base term, and ten percent increases every five years in option periods. Dollar Tree and Family Dollar offer a ten-year lease structure, which is also flat during the initial term, with $0.50 per square foot and five percent bumps in the options.

The conglomerate of issues has dollar stores prioritizing their gross margin line. With supply chain issues top of mind, deep-discount retailers are pushing for self-distribution by relying less on third-party transporting and distribution. Dollar General’s private fleet is expected to comprise 40 percent of the trucks used to transport goods from distribution centers to stores by the end of 2022, a 20 percent increase compared to 2021. Further, the dollar store brand continues its rollout of self-distribution of frozen and refrigerated items, which is already yielding cost savings.

Shoppers are trading down items for cheaper alternatives at dollar stores to stretch their income further. Dollar stores are an all-weather asset type, where people can shop during good times and bad, as customers rely on them for affordability. According to dollar store executives, these shopping habits persisted even as the economy recovered and customers realized the value they offer. Dollar stores are still an excellent long-term investment, with resilient performance during all economic environments. 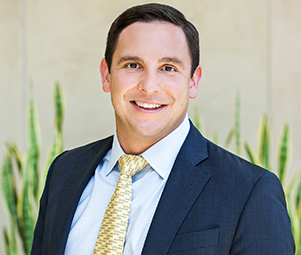