Investment Opportunities in the Southeast

Secondary Cities in the Southeast: What to Expect?

The Southeast has transformed into a hot spot for population and business growth over the past few years, positioning its real estate to be one of the best performing sectors in the country. But the transitionary growth has reached beyond well-known metros and into secondary cities across the region, helping multifamily, retail, and industrial real estate to accomplish record-level investment activity. In this article, Matthews™ will evaluate the up-and-coming tertiary markets in the Southeast and their investment opportunities.

The bustling Tennessee market has expanded significantly since the start of the pandemic, fueling commercial real estate demand and profits. The market’s industrial sector boasts a 1.3 percent vacancy rate, one of the lowest rates in the country, and owners are raising rent swiftly due to high demand. Manufacturing and local distribution has been the primary focus of industrial spaces in Knoxville. Construction ramped up to compete with the increased need, with 2.1M square feet underway. 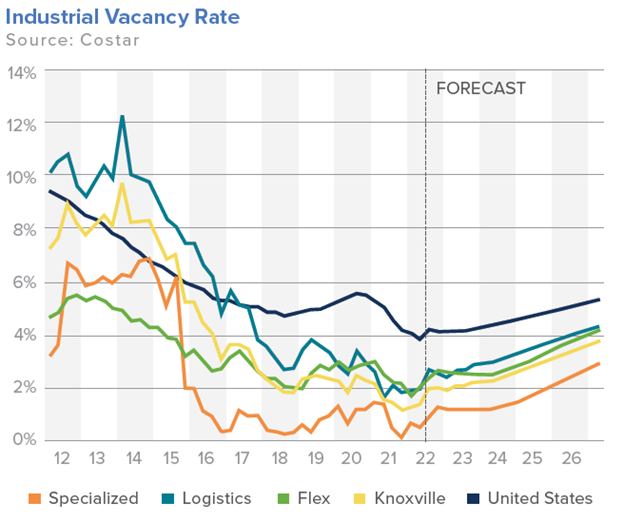 Retail has rebounded quickly in most markets as consumers seek in-person shopping and personalized experiences. Knoxville retail assets sit at three percent vacancy and a $159 per square foot sale price, which is above the national average. Redevelopment is popular among developers, investors, and owners. A major project underway is the redevelopment of the Knoxville Center Mall, which is set to turn into an Amazon delivery center. Retail sales are currently higher than the city’s previous five-year average.

With population growth comes the need for multifamily housing. Knoxville’s multifamily property vacancy is at an all-time low of 2.8 percent and is not expected to rise even with the increase in supply. According to CoStar, the average rent per unit is $1,232, with a year-over-year growth rate of 15.9 percent. The sector also saw record sales in 2021, reaching $600M in transaction volume. The top submarkets to invest in are Downtown Knoxville, where construction is most active.

Although Raleigh isn’t ranked as a primary Southeast metropolitan area, the city is one of the fastest-growing regions in the U.S. Being a part of the Research Triangle region, Raleigh’s employment is driven by a surge in e-commerce jobs. The city reported 1.4 percent population growth in 2021 and a 9.3 percent increase in e-commerce-focused work since February 2020. Industrial real estate is performing well and is rapidly expanding supply with 4.3M square feet currently underway, especially in the Eastern half of the region. The vacancy rate is near the market’s record low at 2.7 percent, and the average cap rate sits at 6.5 percent.

The North Carolina city’s retail market is performing well as annual rent rates grew 7.5 percent. The market price per square foot is $228, as reported by CoStar, and the market’s vacancy rate is 2.8 percent. Grocery-anchored and mixed-use assets reign supreme for retail investors, sustaining consumer demand. Adaptive reuse, transitioning older retail properties into office space, is another popular strategy among developers in the area.

Raleigh is among the most affluent marekts in the Southeast, encouraging landlords to implement higher rents than neighboring towns. The average rent per unit is $1,558, with year-over-year rent growth reaching 16.1 percent. Vacancy rates are below historical averages in both urban and suburban communities, averaging 6.2 percent. Overall, Raleigh is drawing in tech giants such as Apple, INEOS Automotive, and more, bringing droves of qualified renters to the multifamily sector.

The state of Florida experienced incredible growth at the start of the global pandemic and has since become a hot spot for commercial real estate. Jacksonville has stood out as a top market, ranking in the top 20 MSA for job recovery, which has brought in droves of new residents and strengthened the city’s consumer demand and spending power. The metro is also known for its healthcare sector, as it is home to the prominent Jacksonville Mayo Clinic. Industrial has fared well in the environment, offering a 3.2 vacancy rate and a 6.3 percent cap rate. Due to Jacksonville’s ports and international airport, logistics infrastructure is one of the market’s best opportunities for developers and investors. 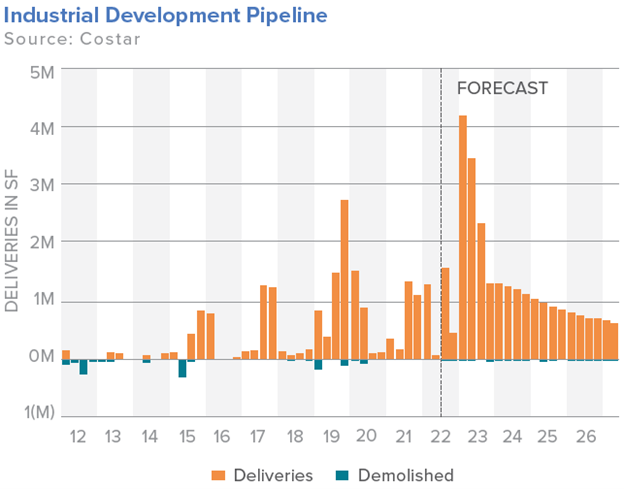 Retail in Florida greatly relied on tourism which struggled during COVID-19, but the influx of visitors returning to the sandy shores and population growth has helped retail rebound substantially. Jacksonville ranked fourth in the U.S. in Q1 2022 for total net absorption and currently boasts a 6.9 percent cap rate. The city also ranks as a top ten for construction, with grocery-anchored retail as a primary focus for developers.

Multifamily investors are reaping the rewards of low supply and high demand for apartment units. The market currently has 9,493 units underway, a 6.5 percent vacancy rate, and $1,493 per unit average rent. Over the past year, Jacksonville multifamily has experienced the most significant push for capital investment in its history, as asking rents are up 20 percent year over year.

Tourism, manufacturing, and transportation all drive Savannah’s booming real estate sectors. Home to the Port of Savannah, one of the fastest-growing import and export terminals in the country, the southern city has surpassed neighboring markets such as Atlanta and Charlotte in job growth. With this workforce comes earnest investors. The city’s industrial space is seeing historic numbers; a 0.7 percent vacancy rate, $108 per square foot market price, and the highest sales volume, $975M, in 2021. National and institutional buyers make up most investment activity, and logistic firms take up most of the leasing activity. The development pipeline is robust as well, with 21.2M square feet in the process.

Big-box closures and stagnant leasing activity hit the market’s retail sector hard, but it has since shown promise for investors. Rent growth is above the city’s historical average and above the national average. In 2021, transaction activity was the highest it’s been since 2016, with out-of-state buyers taking up the bulk of deals. The strongest and most in-demand retail property types include free-standing net lease assets.

The increased desire for coastal living and better employment opportunities has helped Savannah’s multifamily sector expand in interest and profitability. The market’s vacancy is lowest for mid-end housing, but high-end luxury apartment complexes are growing in popularity among new residents. Asset values increased 20 percent in 2021, and the annual rent rate rose 17.3 percent, one of the best year-over-year rates in the Southeast. Development is most prevalent in suburban neighborhoods such as Port Wentworth and Southwest Savannah.

The spotlight is on the Southeast, and investors from across the U.S. have experienced the benefits the region offers in its major cities and its secondary markets. Demand is heightened, and to find the best opportunities, investors will need to look beyond the famous spots and dive into the region’s hidden gems.