Southeast State of the Market Report

How is the Southeast Performing? 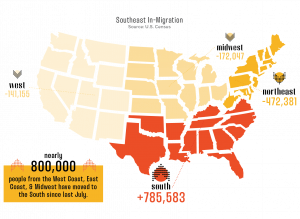 Industrial assets are in demand more than ever, with the increase in e-commerce fueling the need for manufacturing and shipping centers, along with internet growth pushing for greater data and logistics centers. As inflation and wage costs rise, companies are opting for more rural, affordable regions to house their industrial warehouses. Business-friendly metros throughout the Southeast have attracted manufacturing and logistics companies looking to expand. Capital has poured into the region as industrial assets continue to report historic numbers in terms of market pricing and vacancy rates.

The Southeast also boasts one of the strongest industrial supply pipelines in the country. A surge in leasing volume induced the need for a large supply, often rising vacancy rates as new developments entered the market. But vacancies have continued to trend downward despite the robust construction. 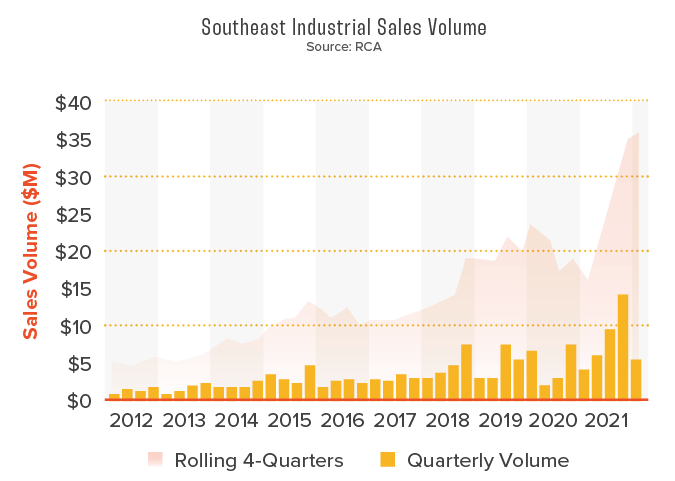 Atlanta, the most populous and capital city of Georgia, has become a sought-after industrial market in the U.S. The city has established itself as a regional and national distribution hub for the country’s fastest-growing Fortune 500 companies, such as Amazon, Delta, and Microsoft. The companies were motivated by the market’s robust infrastructure, strong workforce, international airport, and port access. As more businesses enter the market, competition has increased, and prices are rising rapidly. Industrial market rent rates in Atlanta outpace the national index, experiencing 12.9 percent year-over-year rent growth over the past 12 months. 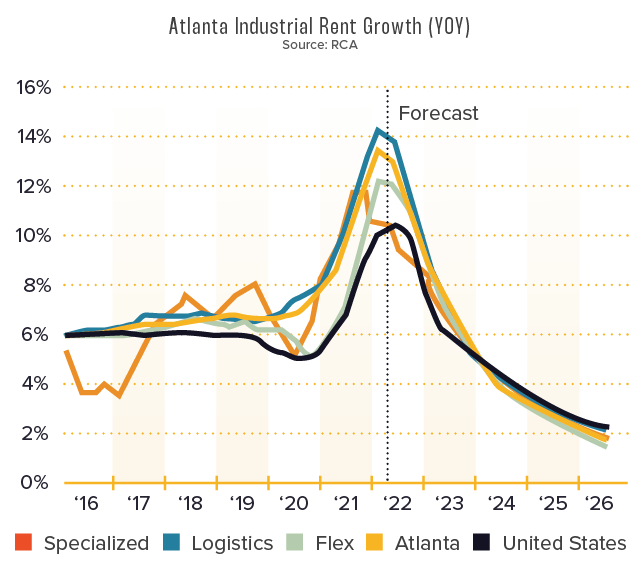 The Southeast apartment outlook has improved substantially since some of the region’s metros took a major hit during the global pandemic. Most markets are seeing robust recovery and historical highs in rent growth and historical lows in vacancy rates.

Investors are drawn to the area by the influx of Fortune 500 companies relocating or expanding to the Southeast, bringing a growing workforce with a need for housing. Vacancy rates are at an all-time low for several of the region’s prime markets and also secondary markets. The pandemic changed how renters viewed their apartment living. No longer did they want high rises and dense cities, but instead places with access to outdoor activities for an affordable rate. This trend has pushed states such as Florida, South Carolina, and Tennessee to experience an influx of movers looking to rent.

Investors are pouring capital into the Southeast, drawn by the market’s strong demographic trends and impressive performance. 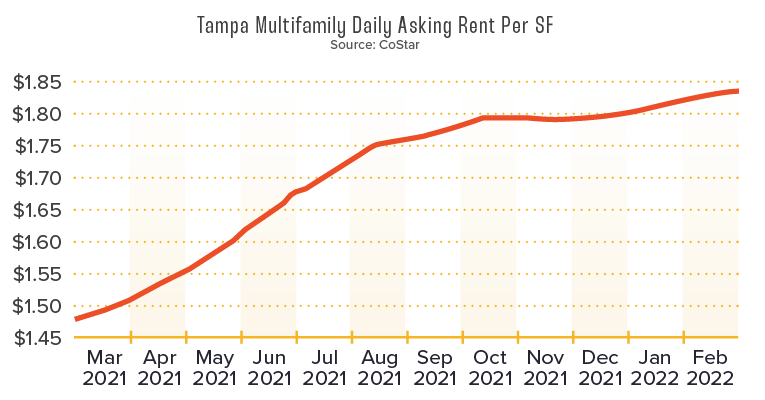 Fort Lauderdale also had an extraordinary year for multifamily. Average vacancy rates reached 3.1 percent in Q1 2022, well below the market’s five-year average of 5.9 percent. Investor demand has produced a competitive and pricey market in the Fort Lauderdale area, compressing cap rates to 4.6 percent. 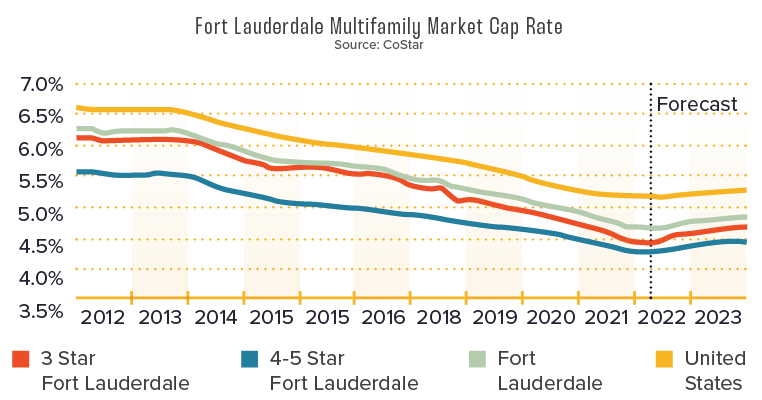 Atlanta has seen a surge in investor interest and demand as the metro continues to see historical population growth fueled by large company relocations and expansions. The city reported historical multifamily sales of over $18B in 2021, $10B above the market’s previous record. Atlanta also reported strong, much-needed development. Last year, Atlanta delivered 8,000 units and as of Q1 2022, has approximately 22,500 units under construction, according to CoStar.

Apartment markets are expanding fast in the metros across North and South Carolina. This is especially true for higher-end properties, which are trading well above average.

AvalonBay closed on the ultra-luxury asset The Hawk for $48.5 million, or $683,099/unit, the highest per-unit price on record in the Charlotte market.

The Carolinas offer more affordable rent rates compared to Atlanta, Austin, and Nashville, stating an average rent rate of $1,505. Although assets are more moderately priced throughout the states, slower rent growth and high vacancy has compressed cap rates. Urban submarkets are experiencing higher vacancy rates than major markets in the region. Charleston entered 2022 with a stabilized vacancy rate of 5.1 percent, well below its 10-year average. Nashville currently sits as one of the strongest multifamily markets in the Southeast and the U.S., reporting high sales numbers and rapidly growing rent rates. The country music mecca experienced the strongest investment activity in history at the start of 2021, totaling $1.1B in sales volume in just the first half of the year. Present-day transaction velocity is significantly outpacing the market’s historical average, with no signs of slowing down. Pricing skyrocketed, and market rent rates are through the roof, with new developments seeing incredible average prices per unit. 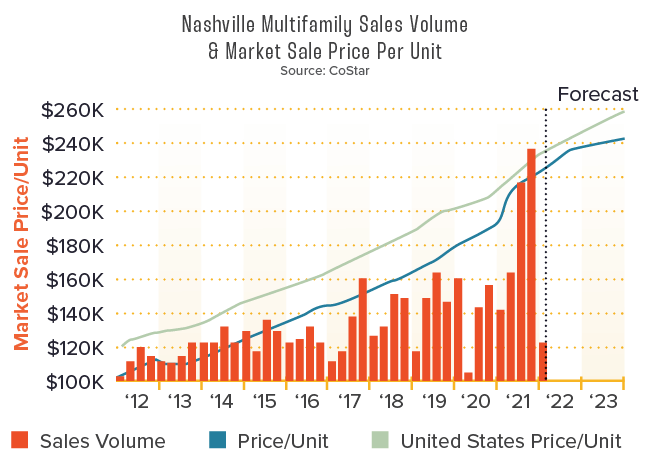 New-build properties in Nashville are going for $300,000 per unit or more. Source: CoStar 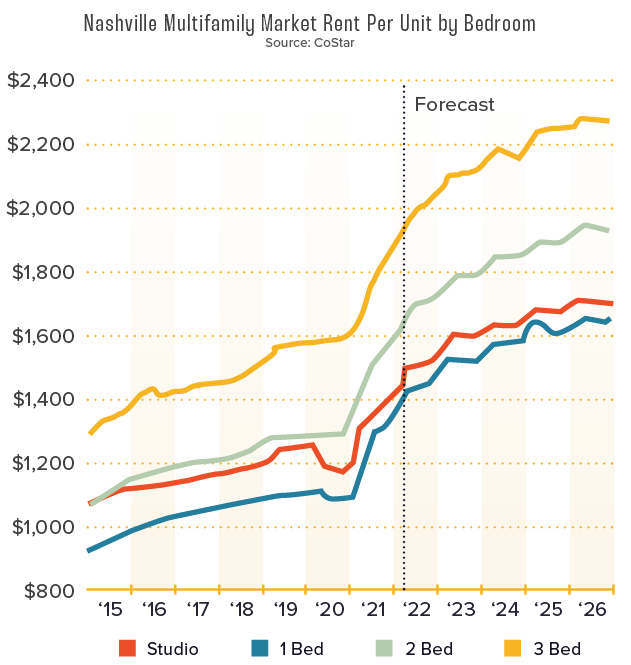 Nashville, home to the largest multifamily development pipeline, will struggle to keep vacancy rates low as its supply grows. This is especially true for more high-end submarkets that have seen continued construction with a lower absorption rate. Middle submarkets and affordable housing options absorbed quickly, keeping the assets’ vacancy rates at bay.

Southeast retail is thriving with an influx of consumers moving into the region. Out-of-state investors, specifically from New York and California, are driving activity throughout the area and have put pressure on local investors, who are rapidly being priced out of the market. Discount retailers, grocery-anchored centers, and fitness centers are some of the most in-demand retail assets in the Southeast, performing well throughout COVID-19 and growing in popularity among consumers. Overall, the U.S. retail sector is strong in major metros, and Southeast markets are no exception. 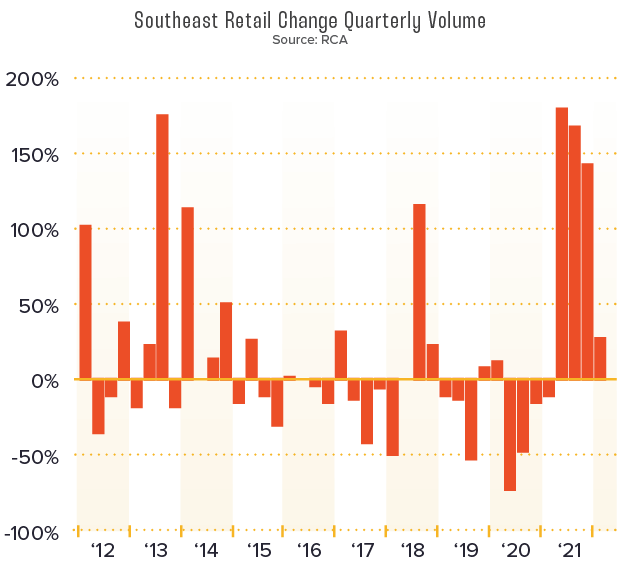 Although highly active, Florida retail markets are some of the most difficult to enter due to intense competition and high pricing. Miami is one of the most expensive retail markets in the U.S., compressing cap rates well below the national average at 5.4 percent and reaching $416 per square foot for the average market sale price. The city boasts a strong development pipeline, but many are pre-leased, adding stress to the tight supply and demand chain.

Miami buyers involved in 2021’s largest five deals paid an average of $424 per square foot, roughly $28 more than investors paid in the top five sales in 2020. Source: The Real Deal

Tampa continues to be in the top ten markets for retail rent growth in the nation, sitting at $21.52 per square foot. Unlike some sectors, retail is not entirely dependent on those who live in the market but can also reap the benefits of a strong tourist population. Tampa tourism swiftly rebounded after the challenges of the global pandemic, helping build its retail sector back up to strong numbers.

Tampa boasts a steady development pipeline, with 830,000 square feet in deliveries over the past 12 months. Downtown Tampa is one of the most active areas for development and is home to the Water Street Tampa project, a $3.5 billion, nine million square foot build that will feature a conglomerate of retail, hospitality, residential spaces, and more. 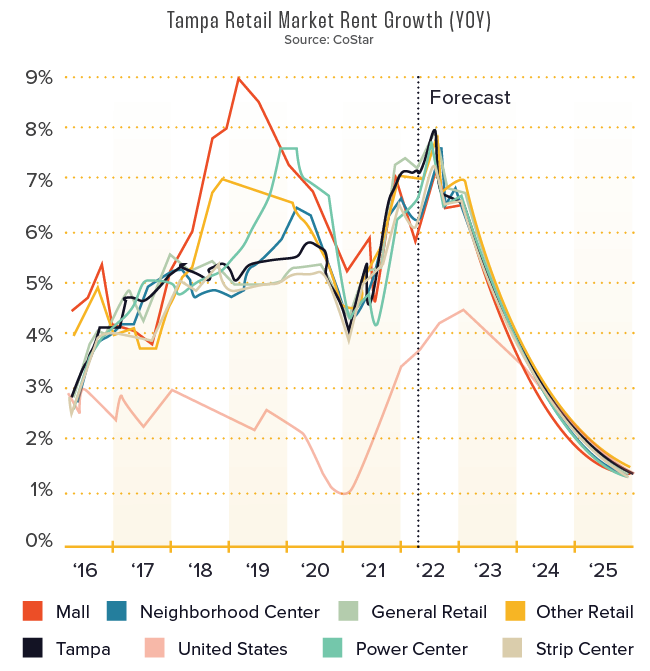 Although the market was hit hard by COVID-19, transaction volume swelled in late 2021 with a record $750M in sales volume for Q4 2021. Rent growth in the market also bounced back considerably due to increased leasing activity and net absorption. Fitness centers and discount retailers drive positive net absorption. Crunch and EoS Fitness both ranked in the top five retail leases in the last 12 months for Fort Lauderdale, leasing over 37,000 square feet. The market is experiencing the slowest supply pipeline in almost a decade, with only 532,000 square feet delivered over the past year. Although not robust, Fort Lauderdale is still seeing some mixed-use developments pop up.

Population growth throughout the Carolinas has bolstered brick-and-mortar retail. Leasing remains robust in 2022, with tenants’ preferences shifting to free-standing and strip centers. As of Q1 2022, Charlotte’s market rent per square foot is $21.50, slightly below the national average of $22.84, and a vacancy rate of 3.7 percent. Columbia’s leasing activity and net absorption improved in Q1 2022, offering much more affordable rents compared to larger Charleston and Charlotte markets.

Cap rates in major metros of North and South Carolina have compressed, reporting an average of approximately 7.15 percent across Raleigh-Durham, Charlotte, Charleston, and Columbia.

Shopping centers have continued to excel in metros with high tourism rates and among expanding Southeast cities. Although COVID-19 accelerated the growth of e-commerce retail, shoppers are craving more personal in-person shopping. Landlords who have adapted their centers to offer a mix of both entertainment and retail experiences have benefited most in terms of strong occupancy and tenant performance.

Nashville is a prime example of how the retail and shopping center landscape is evolving. As the metro continues to expand rapidly in both jobs and population, the market will see many new or redevelopment projects that cater to shifting consumer habits. Substantial mixed-use projects are growing increasingly common and are expected to provide community destinations throughout the city, offering experiences beyond purchasing from storefronts.

Nashville recently wrapped up construction on Fifth + Broadway, one of the largest mixed-use developments in the city that includes 180,000 square feet of retail space, a 385,000-square foot office tower, and more than 350 apartments. Source: CoStar

Shopping center owners have raised rents at a rapid rate due to Nashville’s demographic growth and low vacancy rates. The city’s annual rent growth is among the fastest-growing rates in the country at a total of 8.9 percent, according to CoStar. Vacancies are projected to remain flat over the next few quarters as Nashville continues to see strong leasing and development activity.

Overall, the Southeast market is predicted to continue its significant consumer and investor demand across its commercial real estate sectors. Industrial and multifamily are top performers and seem only to increase sales volume and transaction activity. Retail is doubling down on its post-COVID-19 performance, setting record highs for market rent and record low for vacancies. As investors seek safe and profitable investments, the Southeast continues to prove its resilience and is well-positioned for long-term growth. 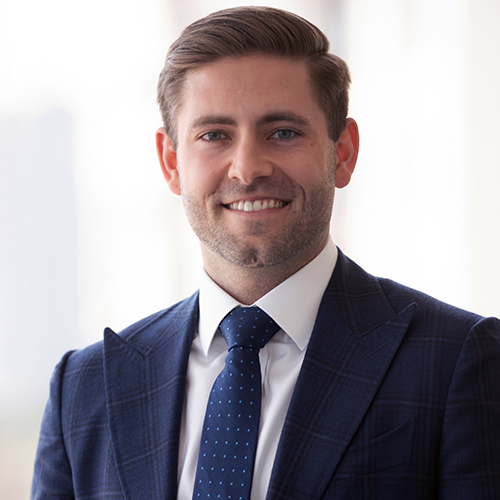 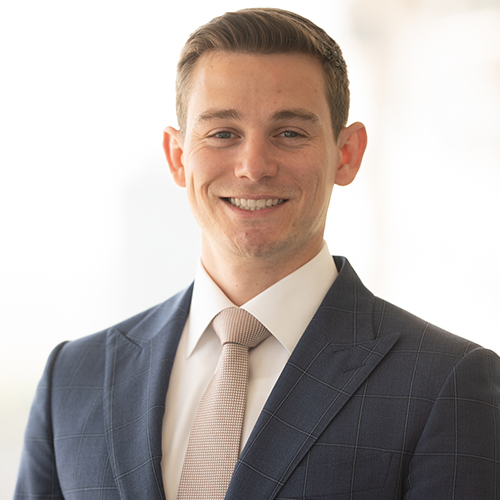 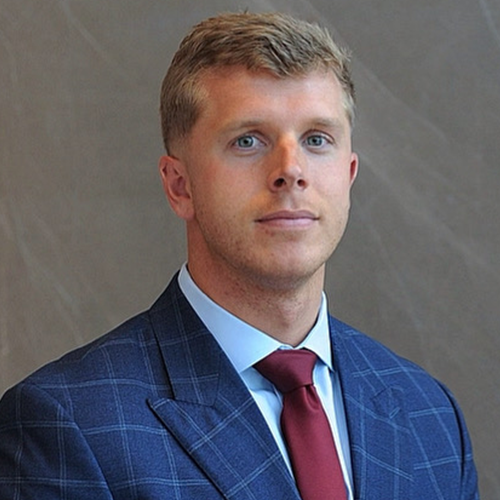