Though Chattanooga has limited available industrial space, the metro still benefits from the Volkswagen Chattanooga Assembly plant that opened in 2011. Over the past several years, auto manufacturing giants and logistics suppliers have seen a boom in industrial demand by relocating or expanding in the area. Construction is minimal, with a mere 318,000 square feet underway, enabling landlords to hike rents 12.5 percent in the last 12 months. Absorption has been robust, recording 1.3 million square feet in the last year, while the market has only delivered 433,000 square feet during the same time. Transaction activity has been elevated over the previous few quarters, achieving a new record in deal volume.

With a 2.5 percent vacancy rate, Chattanooga’s vacancies are well below its long-term historical average. The minimal supply pipeline indicates that vacancies will remain at this level in the near term. Distribution tenants are uncommon in Chattanooga due to the lack of new, efficient distribution facilities in the market. Despite this, the metro has welcomed notable tenants. A medical device firm leased a 162,500 square foot facility at Bonny Oaks Industrial Park, and an e-commerce company leased 136,000 square feet at 2700 Riverside Drive.

Chattanooga boasts a 12.5 percent year-over-year rent growth, outperforming its five-year annual average. Benefitting from the minuscule development, industrial owners will continue to have pricing power in the next few quarters. Last-mile logistics space sees heightened demand thanks to strong household formation in Chattanooga in the past decade.

In the past few quarters, transaction activity has rebounded in Chattanooga. The market reached a new record in sales volume in 2021, accomplishing $250 million. Sales were boosted by the sale of 3063 Hickory Valley Road, a 640,000 square foot distribution center, for $78.9 million, or $124 per square foot. Other than that major sale, deal volume is primarily driven by smaller, older properties in the last few quarters. In the past 12 months, the market has recorded $255 million in sales. 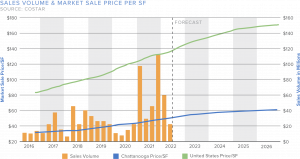 With 318,000 square feet currently underway, development is muted in Chattanooga. Only about two million square feet of industrial space has been delivered since the Volkswagen plant opened in 2011. Though, several automotive manufacturing and logistics suppliers have moved to Chattanooga to be near the plant. The most significant projects in the market were build-to-suits for Amazon, FedEx, and Volkswagen. It is rare to find available industrial assets larger than 100,000 square feet. 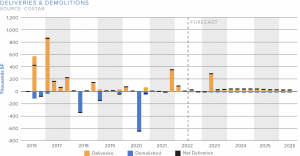 How Cannabis is Entering the CRE Pipeline

What to Know About the Cannabis Real Estate Industry The...
Read More

What We Learned in the First Half of the...
Read More

How Drive-Thrus Became so Popular The quick-service restaurant industry is...
Read More

Build-to-Rent: The Next Big Thing

What is Build-to-Rent? As demand drivers change, incomes shift, and...
Read More

Nashville Retail Market Overview As one of the fastest-growing economic...
Read More